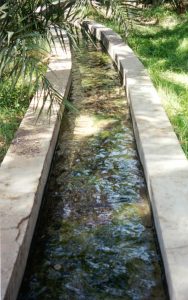 Once, we visited an ancient oasis city, called Al Ain. It is about 80 miles due east of Abu Dhabi, into the heart of the desert and on the edge of some craggy mountains. We drove up one of those mountains, Jebel Haffit, and saw the apricot-colored desert spread out before us, undulating into a haze of heat and light. The heat was so penetrating and the sun so intense that it enveloped us. Given a few more hours out in it, I could easily imagine having mystical visions, as did the Bedouins who roamed all through this land. Now, I also know why they traveled only at night – the sand is too hot to touch and even the camels’ sturdy hooves are burned by it. They would navigate the endless waves of dunes and desert without a landmark, in the pitch black of night, with only the stars to guide them.

This is why most of the stars that have names in our skies have Arabic names. The Bedouins were one of the earliest cultures to chart their way solely by their knowledge of the night sky. And since the desert rarely has clouds, they could steal silently away at any time they wished, without maps, without walls, without roots. Their roots were horizontal, thousands of tentacles inching their way across the sand. Al Ain is the ancestral home of the ruling family, and tradition has it that all the sheikhs come to the desert for renewal and peace, that it is in their blood and bones. It is also said that the sand has ears – two millennia of the ears of the tribesmen who called the entire desert home, not just one part of it. They understood that they could not own the desert, not even a grain of sand; it owned them. 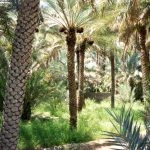 Al Ain comprises hundreds of acres of huge date palms and rivulets of water that pour down out of the mountains in a man-made irrigation system of canals, called falaj. The falaj is at least two thousand years old, and it still functions perfectly today. It is made of hand-fired clay bricks, and was placed both above and below ground, depending on the terrain. The largest part of the oasis is in the middle of town and is tended by the most extraordinary looking men. They are very dark, like ash, all with penetrating blue/green/amber eyes. They look like giant, black panthers, prowling through the trees and along the falaj.

The date palms, probably 500,000 trees in this one area alone, were ripe with dates, which hung in an opulent bundle at the base of the branches, perched against the trunk. The panther men pick and dry them and prepare them for market. They select palm fronds, burn them until they smoke, and set the dates around the smoke until they are dry. The spicy fragrance of the burning palm fronds, combined with the aroma of ripe dates, was a dense perfume. I found myself wanting to lie down among the palms, in the dappled shade, with the cool, clear water running close by, and let the visions come. We walked into the palm forest with a panther man so that he could show us the moving water, and I felt that I was with one of the ancients. We could not communicate with words but he knew exactly what we wanted to see. He waved his hand expansively as we approached the water as if to say this is mine and it is magic.

Later in the trip, when faced with the precision and order of London’s civic buildings and parks, it was clear that there are many ways to have civilization. And the earth is beautiful in all its variety, even in a desert that looks barren and lifeless. The desert is as full of life as one of London’s sidewalks, simply in a way that takes patient watching and an adjustment of western eyes. And I communicated more readily with the prince of the desert dates than I did with one of London’s shopkeepers, because that kind man was willing to allow me into his world, as I find him even today, many years later, in my heart..