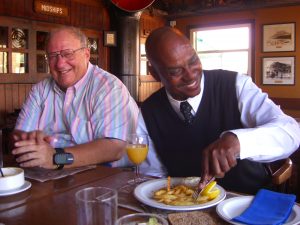 We began our first bright, sunny day in South Africa at the Cape Town Harbor, a place full of movement and life. Once an old dry dock, it had been transformed into an intense arrangement of shops, restaurants, tiny boats, yachts big enough to have helicopters, and a mecca for people watching.

Musicians played everything from classic Frank Sinatra tunes to African tribal dances. We even heard a jazzy guitar version of the “Tennessee Waltz.”  Since we were about the only Americans there, we decided that he played it just for us.

We were somehow lucky enough to be picked up at the wharf by a taxi driver named Ludwick. He took us to the amazing Kirstenbosch Botanic Garden on the massive eastern slopes of Table Mountain, and by the time we arrived, we had already devised a plan to see him again when we completed our time at the garden.

Founded in 1913, the garden was comparable to the best we have ever seen – as open and airy as the Royal Botanic Garden in New Zealand and as densely planted as the Garden in Edinburgh – telling the story of South Africa through its indigenous plants. The estate covered about 260 acres and supported a diverse fynbos flora and natural forest.

Table Mountain, a granite monolith that rose up out of the ocean for 6,000 feet, defined Cape Town, towering over it. It never left one’s line of sight, unless one is looking directly out to the ocean.

The garden climbed up and wound around curves and bends on the shoulder of the mountain, and so we climbed and wound around for about two miles. The garden was famed for its collection of protea, which go into full bloom in October, and for its sculpture by local artists.

The massive arboretum was full of indigenous trees, and the horticulturists do extraordinary work in rescuing threatened plant species, some of which are on display nowhere else on earth.

When Ludwick picked us up, we asked him to take us to his favorite places. He drove us to Haut Bay, one of the many small, 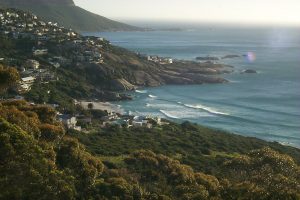 protected harbors that comprise Cape Town, and then high up on Table Mountain where we watched the sunset turn the mountains and ocean a flaming orange.

Next to Table Mountain is Signal Hill with a distant view of Cape Town’s main harbor. In the fading light, we could barely make out the American nuclear aircraft carrier moored in the rough water, but Ludwick wanted us to see it there because he was proud that his country hosted it. He drove us back to the hotel along the ocean front neighborhoods, one each a little different from the other – some upscale and trendy, others that looked like a jumbled-up Myrtle Beach.

But the main story of the day was Ludwick. He was 49-years old at the time and participated in the student revolution of 1976, which changed South Africa forever by ending apartheid. He was imprisoned and tortured for reading a newspaper, but his spirit survived. He had to leave school and go to work to support his children, and he regretted not having more formal education. Ludwick was one of the most articulate, erudite, and wise people I have ever met. He was determined that his four children will go to college and he even sent them to private elementary and secondary schools so that they would have a competitive education.  I can’t imagine how he saved the money to provide that for his children.

He did all of this and lived in what was euphemistically called a “township,” Nelson Mandela Park.  He did own his home, and it had electricity and running water, but many in townships did not.

He said that he realized now that he did all the fighting for freedom in South Africa for his children, not for himself. He knew that they had to have an opportunity to become educated and to live happier and more fulfilled lives. He said it was their South Africa now, that they must take it into the future, and they could do that only by being educated. He worked for fifteen years as an auto part salesman, but lost his job when his company went bankrupt. So, five years ago he started over as a taxi driver, which he was making into a touring business. He wanted to go for formal certification as a guide, but we told him that he should teach the course, not take it. We meant it.

His kind and open face was full of warmth in talking with us and sharing his story.  He wanted to be sure that we understood that he was not bitter about his life. He did not want his country torn apart by a bloody civil war when apartheid ended. Instead, he practiced forgiveness, as Mandela exhorted, so that his beloved South Africa would be a place in which they could all, black and white, take pride.

Once Ludwick got to know and trust our interest in him, he wanted us to know the name that his mother gave him, not his English name. His family was a part of the Xhosa tribe, and his name, Jongibandla.

Jongibandla chose our lunch place, the Mariner Harbor, where the management accepted that a black man could share lunch with white people, something about which Jongibandla had to be careful. The specialty of the restaurant was the famous local fish, called Kingclip. A thick, but flaky, white fish, it was juicy and mild and perfectly delicious. Throughout lunch, Ludwick nodded happily that we enjoyed it.

Over lunch, we laughed and talked like old friends and asked him more questions about his children.

He and his wife did not give them English names but chose only to call them by Xhosi names.

His first daughter’s name is Abongile, which means “thanks be to God.”  The second daughter, Noluvuyo, is “beloved girl.”  The son, Mzubanzi, is “the son and prince.”

And the baby girl, Sinisipho, was a surprise, and she is “gift from God.”

Gift of God.  That would be a good meaning for Jongibandla’s name, too. 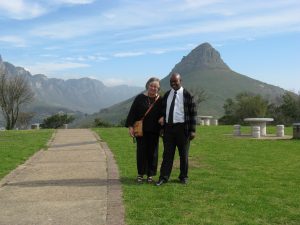 It was hard to say goodbye to Ludwick. We are separated by so much of the planet, making this day bittersweet. But better to have known him and spent time with him, rather than not to have had the opportunity at all. I can still see his open, beautiful face in my dreams.

Perhaps, the fates that allowed us to meet him will allow us to see him again. It’s always the people, isn’t it, who make a land come alive?  We caught a tiny glimpse of this country, bursting with beauty and torn by tragedy, through a fine and inspirational man, Jongibandla, who kept the flame of hope alive in his life, in his children, and in his love of South Africa.