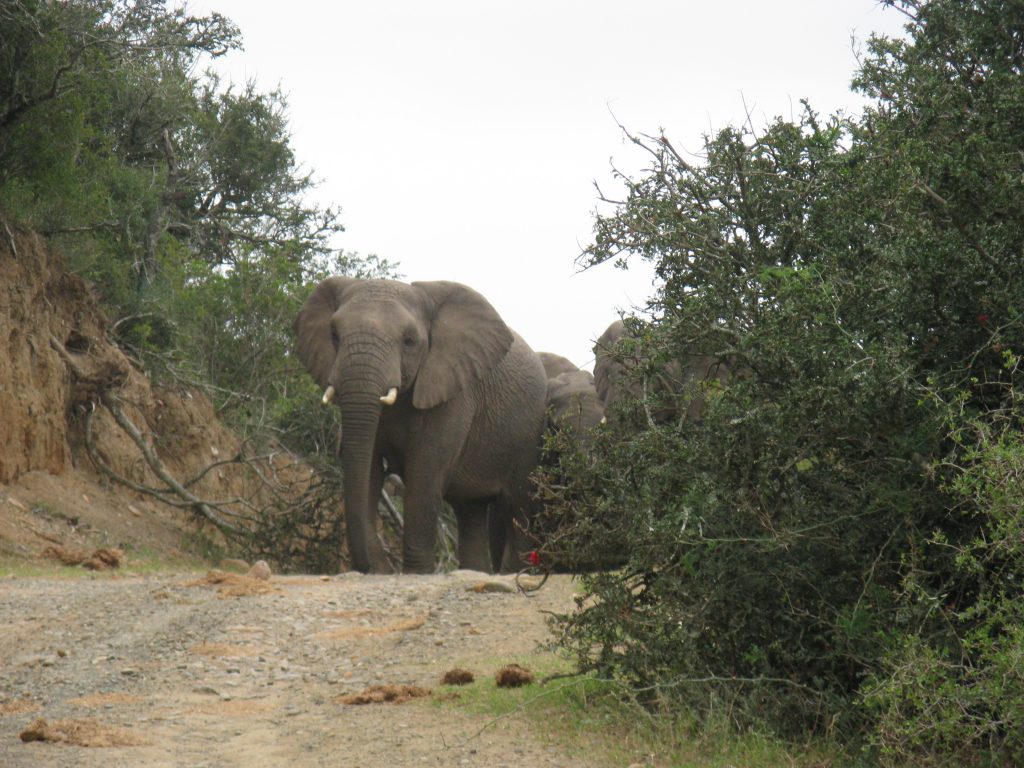 The herd’s Matriarch leads the way.

I feel like elephants are my first cousins. I’m not exactly sure why, except for remembering when I was about four years old and saw “Dumbo” with my mother. There is a moment in the film that I still cannot talk about without crying. The momma, who is behind bars in the circus wagon, takes Dumbo in her trunk and rocks him back and forth, singing “Baby Be Mine.” At that moment, the world stood still for me. Ever since, I have loved reading about, thinking about, studying, looking at pictures of, dreaming about, and finally seeing elephants in the wild. This is where I wish all the world could see elephants, as they are meant to be, free, graceful, and at one with their surroundings.

My husband and I had an unforgettable few days in the Eastern Cape of South Africa at an Edenic game reserve called Shamwari. Shamwari means friendship in a local dialect and it was perfectly named. In all our time in South Africa, this is where people of all places and races lived together in harmony with each other and the land. Our guides were examples of that. One was white South African, Christo, and one was black and from a nearby tribal area, Ben. And they were truest of friends.

After only a few hours on safari, Christo and Ben grew quite familiar with my love for elephants. This was not from me, but from my friends and travel companions. And for the first few days at Shamwari, we did not see one sign of the promised herd.

At last, we found the herd that Ben and Christo had been scouting, unbeknownst to us. To be so huge, they had been elusive. We had followed their scat over dusty roads and hills, and still no elephants. The group was getting worried about me, and constantly asked Christo and Ben, “but what about elephants?”

Out of the glare of sunshine, the matriarch of the herd appeared on the hill only about 300 yards ahead of us. She led her charges down the hill like a prima ballerina, delicately picking her way through brush and rocks, never slipping or stumbling. She turned down the road on which we were parked, and her ears flew out from her head, a signal that she was cautious, but not angry. She decided we were not a threat because humans had never harmed her at Shamwari, and she kept coming.

Christo and Ben backed up a bit and parked us in a patch of grass beside the path, thinking that the elephants would walk around us. But, no, they came right for us and surrounded the safari vehicles. We held our collective breath and sat unmoving. Christo and Ben told us to keep our hands to ourselves and to not reach for the elephants, some of whom were wee babies, and some teenagers, along with the adults. 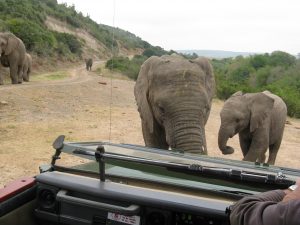 One elephant scratched her trunk on the bumper of our vehicle, rocking it gently to and fro. We sat still. Then she walked around to the side of the truck where I was sitting. She reached out to me with her trunk and gently brushed my arm, a whisper of a touch. Her trunk was soft but muscular, as she satisfied her curiosity about me. She chose me alone, no one else. How did she know? How could she know what that would mean to me?

I cried in amazement and joy all the way back to the lodge.

As she pulled back from the truck, she looked around at her charges, as if to get a head count. They somehow received the signal from her that they were now going to move on to the river at the base of the hill. They were about 20 strong, a powerful matriarchal unit, but they had no adult males. When males reach about 12 years old, they must leave the matriarch’s herd and be trained by other males. Sadly, in some areas, so many of the males have been poached that the younger bulls have no one to teach them in the ways of the herd and they become rogue.

But at Shamwari, at least, they are safe. The owners have a no-poaching policy, which they enforce with Special Forces caliber soldiers. Consequently, the Shamwari animals have no natural fear of humans because humans have never hurt them there.

This time at Shamwari was the closest Bill and I will ever come to Eden on Earth. The harmony and peace shimmered in the air, in the interactions, in the pride of those who worked there, and among the guests who were lucky enough to experience it. And my matriarch is alive in my mind and heart; her place is secure. I can almost hear her singing Baby, Be Mine.

I don’t need an alarm clock. My ideas wake me.