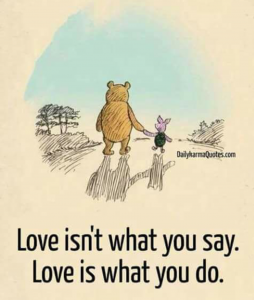 Love According to Pooh

I imagine by now that most of the world has seen the precious four-year old boy from Birmingham, Alabama, for whom taking sandwiches to homeless people in his home town is “the highlight of my life.” With his father by his side, spending all his allowance every week on buying chicken sandwiches, and dressed as his super hero alter ego “President Austin,” he delivers food and drink to people living on the street. He says only this to them, “Don’t forget to show love.”

This got me to thinking about how we learn to show love. Of course, it starts when we are in the cradle and we are gazed upon by the loving eyes of our parents and caretakers. We learn that we can look back at them and keep this connection of tenderness going. We can elicit smiles and sweet sounds, and, in turn, we feel the warmth of love.

Like sponges, children absorb the behavior of the adults around them. If they show love, children learn to respond in kind. They pattern their behavior on what they see and feel. If we’re lucky, that behavior is worthy of being modeled. My sister and I were lucky.

My parents, Harold Oldham and Robyn Moncrief, married on February 4, 1942. The story of their courtship and marriage is illustrative of my daddy’s funny and determined nature and my mother’s generosity and tenderness.

In the summer of 1941, daddy was sitting in the sanctuary of Eastwood Baptist Church in Houston, Texas, which mother’s family attended and where she played the piano and organ while she matriculated at Rice University. Daddy had already finished his schooling at Baylor University where he played center for the varsity football team. He was back in Houston, working in the family’s business, Oldham Barks Lumber Company.

He saw mother’s back as she played the piano and leaned over to his friend and said, “I’m going to marry that girl.”

After the service, he got up and walked over to the beautiful, raven-haired young woman, who had captured his attention. He was holding the collection plate and tapped her on the head with it. She gasped and turned around and he said, “We’re going to dinner tonight.”

She had a steady boyfriend, which was only a slight deterrent for daddy. Finally, Robyn and Harold began dating exclusively and he asked mother’s mother, Marguerite Moncrief, if she could help him persuade Robyn to marry him. She said, “Well, now, Harold, you are just going to have be a little more patient.”

Patience was not his strong suit. Mother told him that she was not going to marry before she graduated from Rice in June 1942 because she wanted her maiden name on her diploma. He just nodded.

On December 7, 1941, they were on a road trip to San Antonio and the radio came on with the news of Pearl Harbor. He pulled his convertible to the side of the road and asked, “Dammit, Robyn, will you marry me now? I have to go sign up for the navy and you have to marry me before I ship out.”

She looked at him, sighed, and said, “Yes, Harold.  I will marry you.” Thus, began a loving and romantic marriage that endured until Harold died way too young, at the age of 51. Her diploma from Rice is in her married name, just like daddy wanted, and he liked to kid her and tell people he put her through school.

Daddy’s mother, Angeline Peveto Oldham, whom he much loved, was sick with breast cancer at the time of their wedding. They went ahead and took a honeymoon to Washington, DC, which mother always said was a terrible mistake. Daddy was upset about his mother’s illness and needed to be with her in Houston. They got back as quickly as they could.  Angeline lived long enough to know that Robyn and Harold were pregnant with their first child, Harriet Elaine, who would be born on August 2, 1943.

After they married and before he shipped out, they lived in Houston for a few months across the street from his daddy, Gus Oldham. During that time, mother was trying to perfect her cooking skills, which were minimal back then. She became a gourmet cook, but as a newly married young woman, she was a novice. Alice and Sam Allen had been with the Oldham family for many years, since before the depression, and Alice was a fabulous, old fashioned cook. She worried that her Harold would starve if all he ate were the preparations of that new bride, so she fixed him a complete meal every afternoon that he ran in and ate before he went home. He parked in his daddy’s driveway, walked through the back door of the house, and ate Alice’s meal, while he kept walking out the front door. He never sat down!

Mother was puzzled why daddy had such a small appetite but didn’t lose any weight. She discovered the ruse quite by accident, but just laughed. She knew that daddy and Alice were inseparable, especially when it came to food. She won over Alice’s heart right then because she didn’t get angry with either of them but understood their bond. Alice even taught mother some of her secret recipes, like roast and six-hour gravy.

Daddy was stationed in Vallejo, California before he shipped out to the Pacific theater on a submarine tender. Mother and Harriet joined him there and they had a happy few months together, living in a motel. Daddy carried Harriet’s crib on his back from the furniture store because they did not have a car. Mother always talked about the picture daddy made, standing in the shower, washing Harriet’s diapers. She said he must be the cleanest daddy in all of America. He was a devoted father and it was really hard on him to leave his girls.  On board ship, he never took shore leave because he wasn’t interested in the nightlife.  He was only ever interested in mother. When he died, one of his shipmates called mother and told her that he had never met a man who was more in love with and devoted to his wife than Harold. Anyone who knew them, knew that.

When he returned home, he went back to work for the lumber company and he and mother had a son, Harold Kenneth Oldham, Jr., who lived for only a few days. Mother had a kidney infection during the last weeks of her pregnancy and the baby’s kidneys were not formed because he was born prematurely. Daddy never left the hospital during those terrible days, and he stayed by his baby boy in the nursery when he wasn’t in mother’s room. She was feverish and ill and never got to see her little baby boy, something that haunted her the rest of her life, never getting to look upon his face, a face that others who did see him said was just like daddy’s.

They were told that mother should not attempt another pregnancy, but she would have none of that. She regained her strength and returned to her optimistic nature, determined that they would try again. I, Marguerite Angeline, was named for my two grandmothers, and was born on April 28, 1949; mother called me Marguerite and daddy called me Angeline. How I have missed the sound of ‘Angeline’ being said by my daddy.

On the rare occasion that mother and daddy went out on a Saturday night, Harriet and I would sometimes stay at Gus’s house. We called him Poppy. Poppy would sit in the living room because he made us sleep in his bed. Alice stayed in the room with us on a little pallet on the floor. Poppy never put on his pajamas but stayed up the entire night, dressed in his starched white shirt, tie, and perfectly creased, black wool slacks. When we awoke in the morning, there he would be, all dressed and ready, never having moved, asking what we would like for breakfast. I guess he wanted to be ready in an instant if something untoward should happen. Granddaughters were about the only thing that I ever knew to make my Poppy nervous.

I was only 19 years old when my father died. I never got to have a truly adult conversation with him. There are so many questions I would like to have explored with him. What was it really like on board the submarine tender in the Pacific? What was his job on the ship? Was he scared? How did he manage to live through the grief of losing a son? How would he have felt to know his four grandchildren?

Though I will never get to have that conversation with daddy, what I have in me is his unconditional love for his family and a pattern of living that I have tried to adopt. He never held a grudge. He forgave quickly. He laughed often. He was rarely critical. He didn’t talk much, but when he did, it mattered. He gave great advice, often in the way of Texas sayings. For example, when I was a teenager and suffering through boyfriends and crying my eyes out, he would say, “Don’t worry about that boy, Angeline. Boys are like trolley cars. One comes along every five minutes.”

Our mother and daddy had a relationship that was deep and true. Harriet and I understood that they loved us very much, but that their love for each other was somehow different. They never engaged in much public display of affection, but the affection was evident in small gestures and words. One day, when I was about 10 years old, they had one of their rare arguments. Mother grabbed me up and said that we needed to go get the laundry, so we left the house quickly, but were back in only thirty minutes. When we got home, mother called out, “Harold, Harold, where are you?”

The house was unusually dark, and we heard daddy say, “I am in the den, Robyn.”

“Why are you sitting here in the dark?”

“You left the house and didn’t kiss me goodbye. What if something happened to you and the baby, and that would be my last memory of you? You just can’t leave and not kiss me goodbye, ever again.”

Mother didn’t know whether to laugh or cry, so she just said, “I promise, Harold.” She leaned over and kissed him.

And she kept her promise.

I was an impressionable 10-year old, and that moment became engraved in my mind, that lesson of love and forgiveness and tenderness. My daddy was big man, with strong hands and a powerful presence. But when it came to my mother and us, he was all heart and feelings and kindness.

Between the two of them, they provided a way for me to understand the importance of what President Austin already understands at his tender age of four – don’t forget to show love.

The greatest part of a writer’s time is spent in reading, in order to write; a man will turn over half a library to make one book.