An Old Man and His Fort 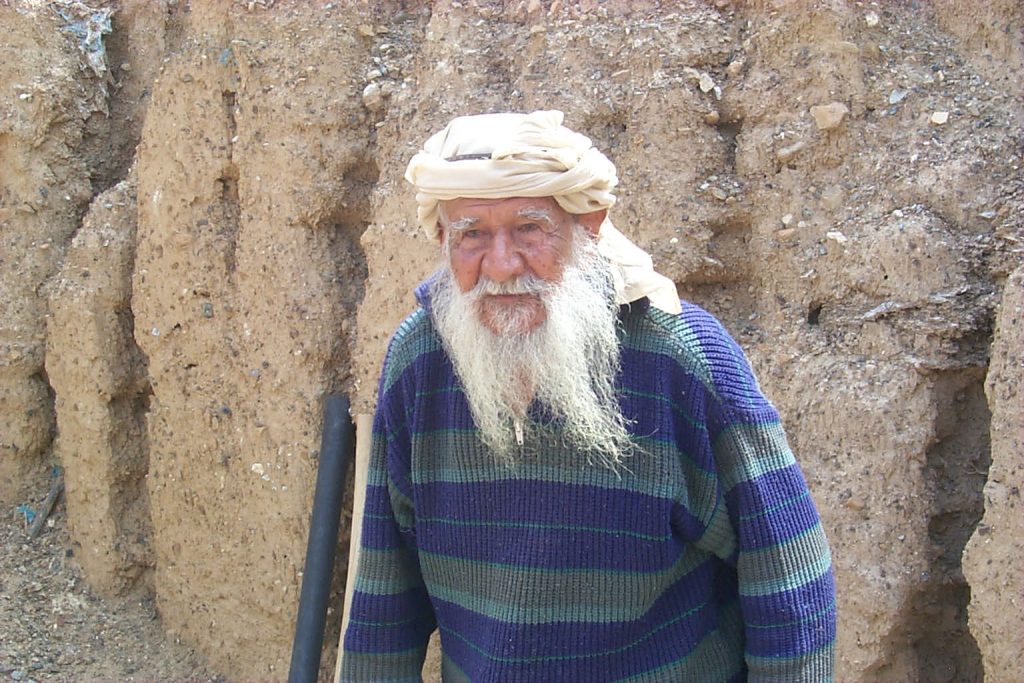 The Old Man and his Fort.

A few years ago, we were lucky enough to travel several times to the United Arab Emirates, where Bill had work that he loved in the medical system there.

Our travel to the UAE taught us so much – mostly how much there is to learn about the world, but some truths are universal.  We had an unexpected experience that crossed all those cultural barriers and language divisions between west and east. 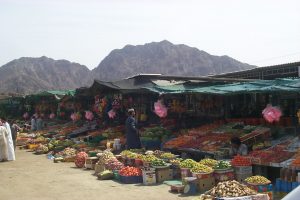 The Friday Market and its Fujairah Apples.

We visited the emirate called Fujairah, the only emirate on the Indian Ocean. If you look at a map, it cuts across the Hajar Mountains, separating the tip of Oman on the straits of Hormuz, from the rest of Oman. On our drive from Abu Dhabi, the scenery changed from urban to the edge of the desert to mountainous in the span of only three hours. We stopped for pictures along the way, especially at the “Friday Market” in a little hillside village. We have no idea why it is called that because it was wide open, not on a Friday. The stands of fruit and vegetables, most locally grown, were a rainbow of colors. Fujairah apples are reputed by people in the UAE to be the “best in the world,” so apparently, these hardscrabble mountains are more fertile than they appear. 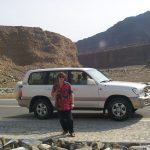 The mountains were charcoal brown, unrelieved by any naturally growing green thing. They looked like enormous piles of mulch, rolling and crumbly, as though they had just been shoveled from a truck. In fact, they looked so much like mulch that I imagined they would be soft underfoot. But they were hard, solid rock. Every mile or so, we saw acres of date palms along the road, sprung up through the good graces of the local water supply and irrigation canals, called falaj. The water is fairly abundant in ancient wadis, or steep canyons, that are fed by mountain waterfalls. After thousands of years, much like the Grand Canyon, the sides of the wadis have been worn sheer and deep, usually about 100 to 150 feet deep. The wadis meander snake-like throughout the Hajar Mountains that separate the Arabian Gulf from the Indian Ocean. During the brief rainy season, they are not navigable, but for most of the year a four-wheel drive vehicle can access them. 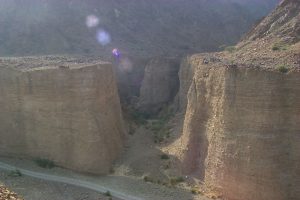 Wadi deep in the Hajar Mountains of the United Arab Emirates.

After two days on the Indian Ocean, exploring tiny fishing villages, we drove back through the Hajar Mountains to Dubai.  There we happened upon an ancient fort that once guarded a mountain pass between the emirates of Sharjah and Fujairah and protected a precious water source. Fort Bithna has only one resident, and he never leaves it. This man is said to be over 100 years old, with white wispy hair and beard and a face with wrinkles as craggy as the mountain he guards. He lives in utter solitude. We entered the fort through a small, tunnel-like opening, only about three feet high. We stooped over and half-crawled our way into the open-air chamber beyond an iron door. Every now and then, neighbors will bring him food and drink, but he is mostly alone in his one inside room and his one outside room. Both rooms had bare cots and some frayed straw mats. Worn leather chests, shiny with age, stood against an interior wall. 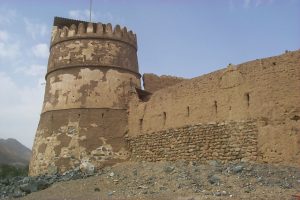 The Old Man greeted us with a hushed, raspy voice, happy for us to see his home and to have his picture made with us. We shared only a few of his words, but he made himself perfectly clear. He swept his arm around his home, like a stooped model on his own version of The Price is Right, making sure we saw his meager, but precious possessions. When I stood next to him for a photograph, he took my hand and held it gently but firmly. As I turned from his side, he grabbed my shoulder, showing unflinching strength for one so old, and he held me there for a long moment, then he kissed my hand. He was so tender with us, we who must have looked like strange, white giants to him, and he displayed no fear, only kindness and love. 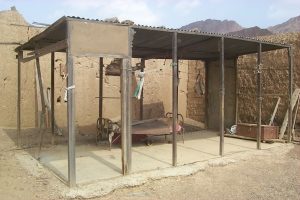 The Old Man’s outside room in the Hajar Mountains.

So, of course, love is the universal truth, whatever our name is for God, and however odd and exotic we must seem to each other in this wide world. This old man shared the gift of his love with us as freely as if he had known us all his life, and for a moment, time stood still in the Hajar Mountains.

The art of writing is the art of discovering what you believe.